The Worst Injuries I’ve Ever Had – August Writing Challenge #8

Today’s Blogger Challenge is to write about my worst injuries…

Of course, I’ve had the usual sprain and strains, but, Wow…I’ve had a few doozies too!

In high school I blew out my knee…torn ACL, MCL, and cartilage playing basketball in Grade 11. This totally sucked, I ended up needing surgery to fix it, but I was young and healed fast. Since my original injury way back when, I’ve reinjured the same knee and had surgery 4 more times! Brutal! 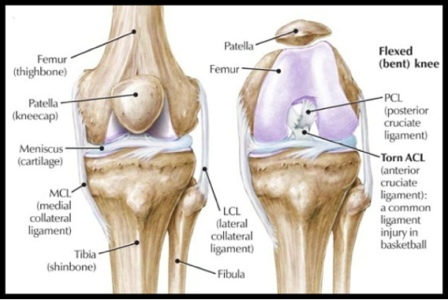 In my first year of teaching…almost 15 years ago, I injured myself playing indoor soccer. I had what is called a Complete Orbital Blowout. Basically I broke all the bones surrounding my eye and the right side of my face went from my nose pretty much straight back to my ear…it was pretty gross! Unfortunately, my mom would not take a picture of me with my ‘broken face’ so i have nothing to show. Trust me…it wasn’t pretty! My nose bled like a tap because I cracked open my sinus and left a huge puddle on the turf – they actually used a wet/dry shop-vac to suck it up! Disgusting! I needed plastic surgery to repair it and now have 4 teeny tiny screws in my head just under my right eyebrow and a mesh plate in my cheekbone.

My most recent injury, and one I am still dealing with today, is stress fractures in my foot and at the base of my tibia. At the beginning of June I fractured my 2nd and 4th metatarsals as well as just above the medial malleolus of my tibia. I spent 7 weeks in a boot cast and now that the fracture sites are healed, I am dealing with extreme stiffness in my ankle as well as arch pain and pain in the bones of my ankle, mainly the talus and navicular.

What are your worst/biggest injuries?

1. Yesterday hubby had a rare day off during the week, so we took the kids to Canada’s Wonderland with our friends Jeff and Courtney and their two kids. It was Ryan’s first time (and Tanners too, of course) and she LOVED it! She was able to go on pretty much all the rides in the kids zone, and Tanner was actually able to go on quite a few too! We had a awesome day full of fun rides and water slides.

Fun at Splash Works! A great way to cool off on a super hot day!

Dads and kids at the end of a busy day!

Two tuckered out kids. Both asleep before we were out of the parking lot! 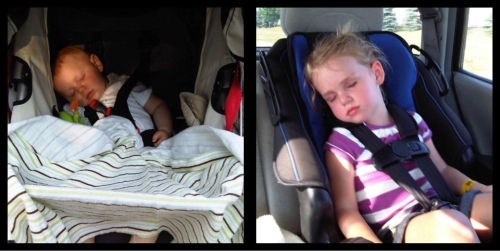 2. I got my boot cast off today! Woohoo! I’m soooo glad. I still have a ways to go before I’m back to running and doing BodyAttack, but at least I can walk and get back to building strength and improving my endurance! Not only do I have a bit of a bad tan line…

…but it’s crazy the amount of muscle loss that can happen in such a short time…my right calf is a little over an inch and a half skinnier than my right! Wow!

3. Big Brother started last week, and I’m loving it! I don’t watch a lot of tv – actually, besides treehouse, I don’t really watch any. Big Brother is my guilty pleasure… I think I have watched every one of the 13 seasons to date…sad, I know, but I love it! And, since it’s already 9:30, I’m going to cut this post off here and fire up the PVR so I can get started on tonight’s episode. Gotta see who gets evicted…I kinda hope it’s Frank…only cause I’m not a huge fan of Boogie…man is he cockie!

Anyone else a BB junkie?

Yep, it’s Satursay afternoon and I am finally getting to my Thursday post…it’s been another busy week and blogging just was not a priority. But now that I’m back, I have some catching up to do!

Here are 3 random things that have happened this past week…

1. The kids and I went to visit my sister Kim and her family for a few days at their cottage. They live in Hershey, PA, which is about 8 hours from here, so we don’t see each other very often…actually, it’s been about 5 years since our last visit! It was the first time the kids met each other, but they had a great time and played really well together. Here are some pictures of our visit.

The Boys (William and Tanner) hanging out at the park. 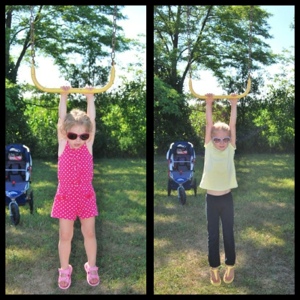 Ryan and Ellie hanging from the high bar. 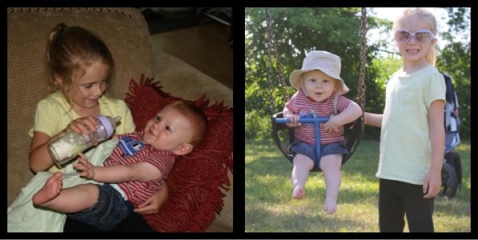 Ellie absolutely LOVED Tanner and was super helpful while we were there. This is Ellie’s first time holding and feeding a baby…lucky Tanner!

We spent the morning at the beach playing in the water and building sand castles. Super Fun!

Ryan didn’t actually eat a smore…but sure enjoyed eating all the parts separately!

2. I am so looking forward to Thursday…I am seeing the doctor again about my foot, and I am really hoping that she says I can take off this boot cast! I’ve had it on for 6 weeks, and I am so sick of it! I’m pretty sure that wearing it is messing up the rest of my body…my other knee is sore, my back…everything just feels out of whack!

I am supposedly to have it on for 3 more weeks, but my foot is actually feeling pretty good and the fracture sites don’t hurt anymore, so let’s hope it’s good news and I can start to work my way back into running and doing BodyAttack. Oh, and start to get myself back in shape…6 weeks of pretty much no cardio is not a good thing, I’m starting to feel a bit like a bowl of jiggly jello!

3. Since I finished my 40 Day Clean Eating Challenge, I have not been eating very well at all! I need to do something to get back on track…I’m thinking of trying a cleanse but have no idea how to go about choosing one. Any suggestions? It doesn’t have to be drastic – I’d actually prefer if it wasn’t- but I’m feeling really blah and feel like I need a bit of a body detox. If you’ve tried a cleanse with success, please share it with me. I’m going to do a bit of research this week and try to learn a bit more about cleansing…hopefully there is one out there for me!

1. I’m totally bummed! I had a bone scan on Monday to see what’s going on in my foot, and the results were not good! It turns out I have more than one stress fracture and that I have to wear the boot cast for 6 more weeks! No running, no BodyAttack, pretty much no weight bearing activities for SIX MORE WEEKS! That’s half the summer! Seriously, what am I going to do with myself?

On the bright side, it’s not a plaster cast, so I can shower with (relative) ease, drive my car, walk…I know, it could be (much) worse!

2. Since cardio is pretty much not an option, I’ve decided to start a weight training program. Next week I am going to start the Venus Index Workout Program. Not sure what it’s all about….click here… or here to watch a short video. Basically, it’s a program geared specifically to women, involves 3 (super intense) workouts a week – which are clearly laid out and easy to follow. Sounds perfect!

A friend of mine at the gym has been doing these workout for a few months now, and she looks amazing! She loves the program and has gotten great results. I’m looking forward to getting back into the gym routine…it’s been over two weeks since I have done any form of physical activity. I definitely need to get back at it!

3. Friends of ours, Joanne and Dan had a baby girl last Sunday and tonight my sister and I went to visit and meet baby Kenzie! She is sooooo sweet! And soooo tiny! I already forget what it was like to have babies that tiny….and it’s only been 5 and a half months! Check her out….isn’t she adorable!

This week I have experienced a few ups…and a few downs….

Up – yesterday Tanner and I went to Movies for Mommies with my friend Lisa and her little man Grayson. We saw What to Expect When You’re Expecting. 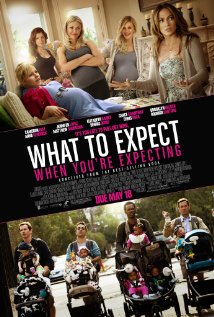 I’m pretty sure I can count on one hand the number of movies I’ve seen since February 2010 when my daughter Ryan was born – off the top of my head I can only remember 3… Cowboys and Aliens, The Hangover, and Hunger Games (which I also saw with Tanner at Movies for Mommies). So, really, I don have much to compare it to, but I thought this movie was great! There was a huge cast and several laugh out loud moments. There were also a few sad parts where I struggled to hold back the tears…apparently I still have a few of those pregnancy hormones lingering!

Anyways, if they have movies for mommies – I think it’s actually called Stars and Strollers – in your area, you should definitely check it out. It’s a great way to see a movie when you have a baby at home! I’m thinking it might become my usual Wednesday afternoon thing, well, on rainy days anyways!

Have you seen any good previews lately? I’m not much if a tv watcher so I have no idea what’s currently playing or what’s coming soon. What should my next Movies for Mommies movie be?

Down – I have a stress fracture in my right foot. I’m not exactly sure what caused it, probably the combination of too much running and BodyAttack, along with not enough rest and too little sleep. So now I’m in a boot cast for the next 6-8 weeks…with the possibility of being in a regular cast depending on what my bone scan shows. Unfortunately my bone scan isn’t scheduled for a week and a half, but I’m really hoping I get in on a cancelation sometime in the next few days…I desperately want to know what’s going on and how long I will be laid up. I’m thinking not long if Ryan keeps kissing it better a least 10 times a day! Too cute!

Not that there is ever a good time to be in a cast, but with my BodyAttack Certification Video due August 6th I’m pretty much screwed! I’m super disappointed too, because I was working hard on it, and planning to have it in by the end of June. Im hoping this is a good enough reason to be granted an extension…fingers crossed!

I was also planning on joining a half marathon training clinic as a good way to prepare for a fall half and meet some new people, but that’s not going to happen now, since it starts in less than 2 weeks! Bummer! Broken bones suck!

Have you ever been sidelined due to injury? How did you cope? It’s only been a few days and I’m already struggling with the lack of exercise!

Up – I’m totally enjoying the Green Smoothie Challenge. Each month, Amanda over at Run to the Finish hosts a challenge and this month’s challenge is to drink a green smoothie every day. Before starting this challenge, I had never had a green smoothie, and I have to admit, I was a little nervous…the pictures I had seen looked disgusting!

However, 7 days in and I’m loving it. For the most part, I’ve had the smoothies for breakfast, and I’m finding they are a great way to start the day. They don’t exactly look appetizing, but most of the ones I’ve tried so far have been really good!

I’m looking forward to many more Green Smoothies, and actually bought some kale today so I can mix it up a little. If you have any Green Smoothie recipes you can share, I’d love to give them a try. I have 23 left to make and I’m already struggling to come up with new – and delicious – combinations!